As mentioned in the previous post, I attended Gary Con X this past March. While most of my time was spent running games, I squeezed in a bit of tabletop wargaming. Orc’s Drift has already been covered, but the second game I played in was near-and-dear to my Middle-earth-loving heart. It was a scenario based on the story of Beren and Luthien, specifically the flight to Doriath following their escape from Angband. It was one of the final events of the con and well-worth the wait.

The scenario used the Chainmail rules rather than the SBG, but was otherwise a wonderful chance to get some Middle-earth miniature gaming done on the road. The referee and scenario designer was Kevin Cabai, a Tolkien fan and an experienced wargamer. He really knows how to construct a Middle-earth miniatures battle that is both entertaining and steeped in Tolkien’s work.

The premise was the Beren and Luthien were almost to Doriath, but the forces of Morgoth were closing in. To protect his daughter, Thingol and his allies take to the field beyond the Girdle of Melian, forcing the servants of Morgoth to engage them. The delay may allow Beren and Luthien to reach safety. Beren and Luthien used hidden movement rules (movement was tracked on paper and known only to the player controlling the duo and the referee) and Angband employed orc trackers to try and pinpoint their location on the board. In the meanwhile, the orcs, wargs, and trolls of Angband marched on Doriath. Would Beren and Luthien reach safety or would the forces of evil extract vengeance and possibly reclaim the lost Silmaril?

I was on the Evil team for the scenario, placed in command of three units of trolls. After running games all weekend, bashing and lumbering was about all I could handle tactically, and I feel I did a good job commanding my forces. I’ve never had the pleasure of using the Games Workshop trolls on the table before, and even though we were playing Chainmail, it was still a great deal of fun to wade into a company of dwarves and start squashing them into jam.

My brutes also had the honor of slaying King Thingol, after being forced to slowly plod through dense woodlands when a unit of wargs cut off my advance. Stupid mutts. But our dogged patience was rewarded when we engaged with the High King of the Sindar and laid him low with a high roll of the dice. Not a bad way to end the last event of the convention.

Ultimately, evil scored a minor victory. Beren and Luthien were slain along with Thingol, but in the end, Carcharoth escaped with the Silmaril in his belly, granting the wolf the game.

A week ago, I was in Wisconsin to attend Gary Con X, a gaming convention held to remember the life of game designer and co-creator of Dungeons & Dragons, Gary Gygax. It was the seventh Gary Con I attended and it was good to be back in the gaming motherland.

After seeing it set-up and played several Gary Cons in a row, I finally got to experience the glory that is "Orc's Drift." This is an alternate history historical miniatures wargame scenario where the British defending Rorke's Drift find themselves not under siege by the Zulus, but by a horde of orcs fresh from Isengard. I was duly elected the war-leader of the orcs and, despite having to leave 15 minutes early, led my forces to victory over the vile British invaders of the sacred orc motherland. I mostly did this by agreeing to whatever strategy was proposed by my fellows and trying to roll high on the dice whenever possible.

I stopped by the table later in the con and noticed that the previous game had a lot more orc casualties, leading me to believe the British won that game. I'll take our early Friday victory as a testament to my superior leadership skills and the valor (or bloodthirst) of my under-commanders.

While the game uses Chainmail rules to resolve the battle, the figures are all from the Games Workshop line of Lord of the Rings SBG miniatures. Seeing them arrayed out on the table and facing off against stiff-lipped British infantry was a hoot-and-a-half. Winning the battle was even better. Below are some photos from the event. You can watch the battle-mad orcs advance, hungry for man-flesh, and their eventual overwhelming assault on the British outpost. 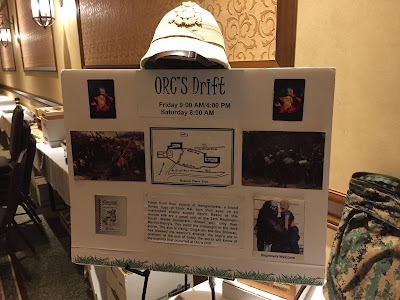 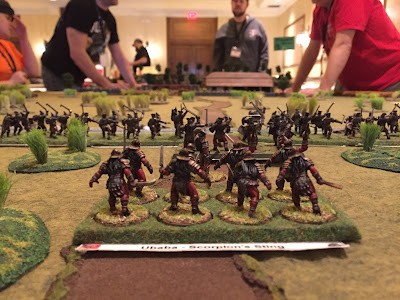 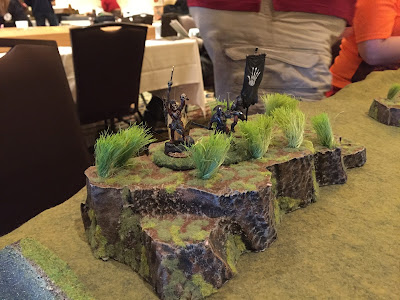 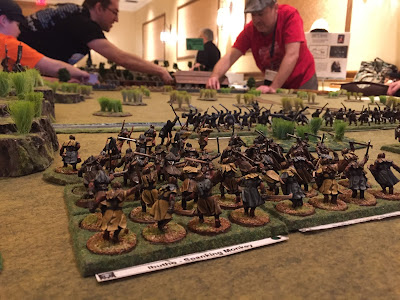 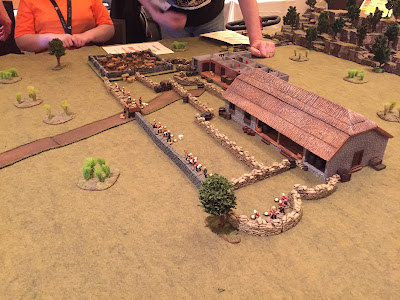 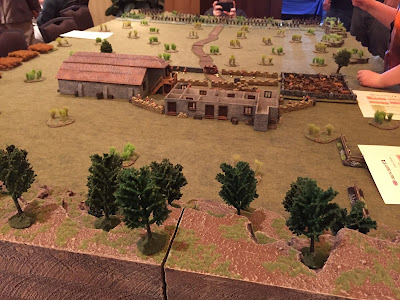 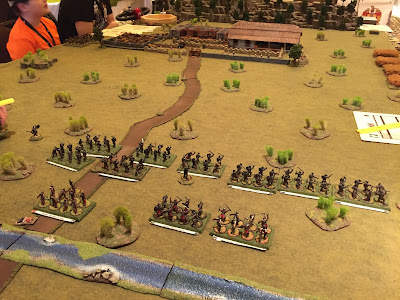 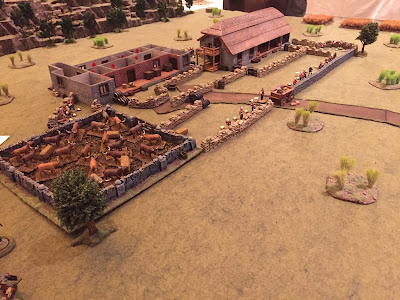 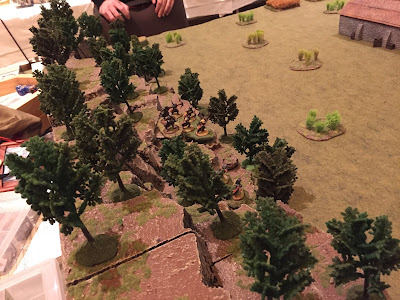 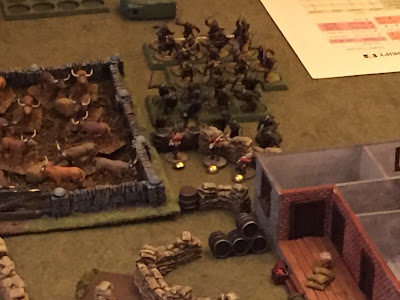 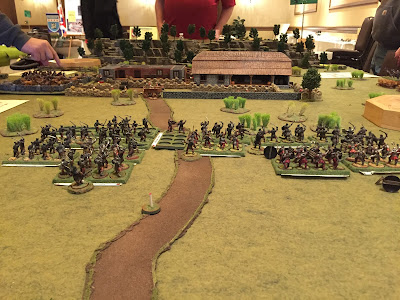 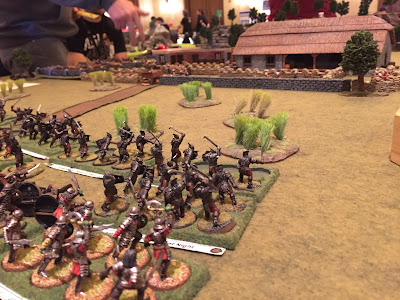 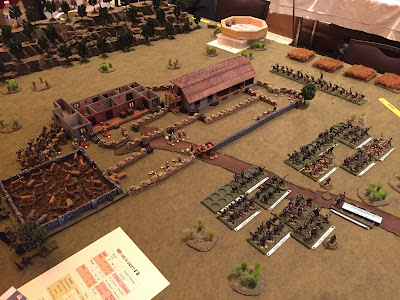 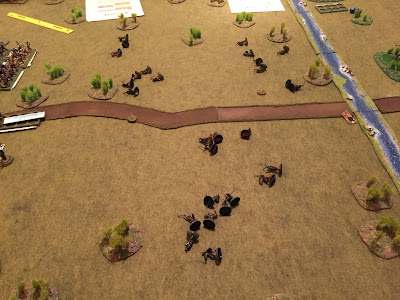 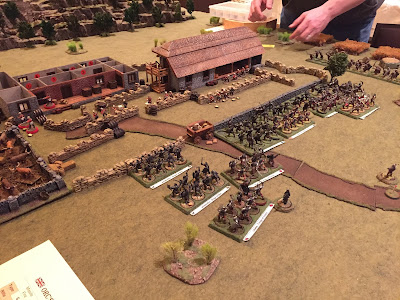 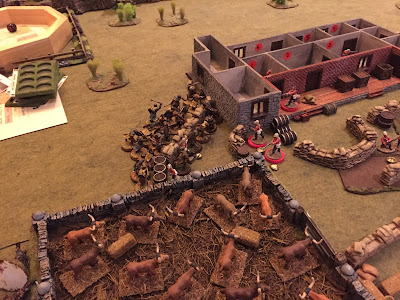 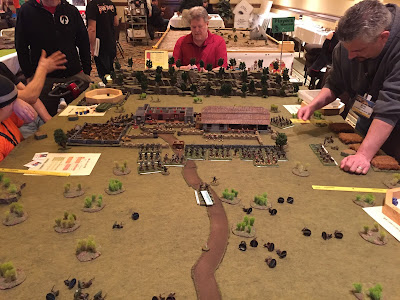 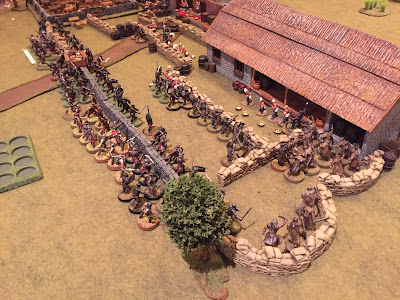 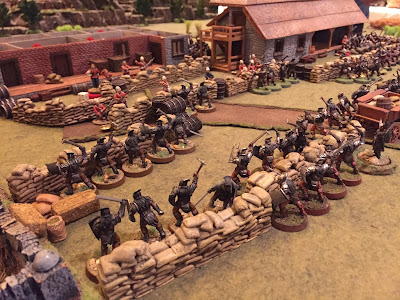 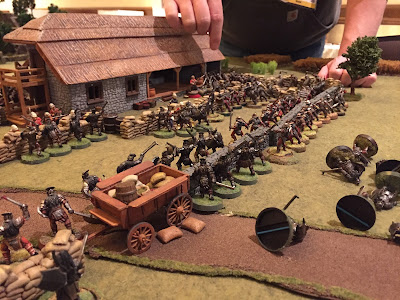 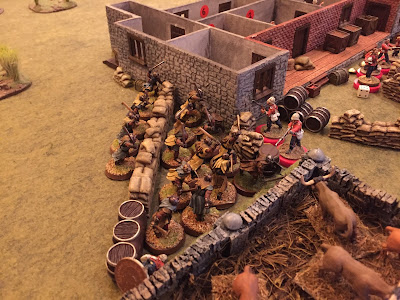 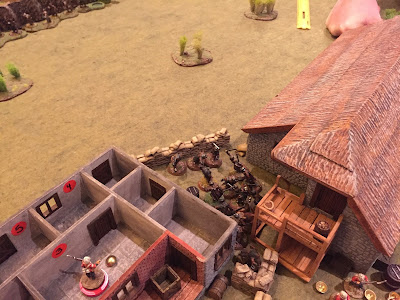 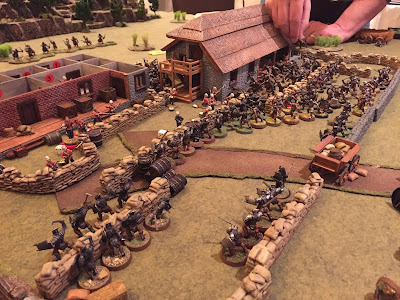 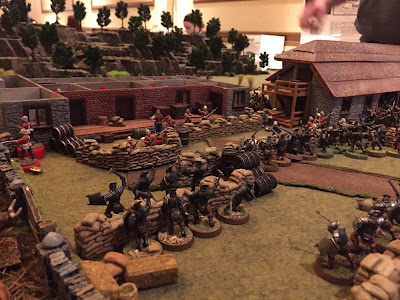 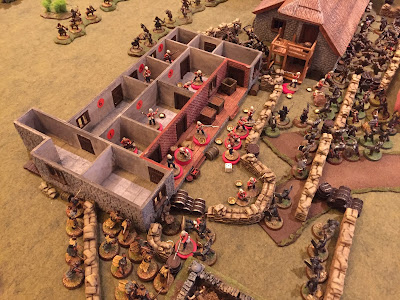 Being a list of rumors overheard and observations made of Middle-earth, organized by game session. Last updated: 3.18.18

Email ThisBlogThis!Share to TwitterShare to FacebookShare to Pinterest
Labels: campaign reference, rumors and legends, The One Ring

Over the course of the campaign, you will meet many interesting people. Some will be living, some will be dead. There will be friends and enemies among them. You (and I) will sometimes forget who’s who. This page is to help us all remember and to keep your own notes straight.

This list is presented in alphabetical order by first name. New names and notes to existing names will be added as the campaign develops. I won’t track the more famous names in Middle-earth here (so no Radagasts or Beorns), as I assume you’ll remember them easily enough.

Bill Stonewater of Bree: Dead traveler encountered in the ruins. Possessed by a wight after dying from goblin-inflicted wounds. Was bringing a parcel to his brother, Ned, in Bree when he died.

Eberulf, called the Amber Hand: Woodman recently returned from Dorwinion who has undertaken the resettling of Thorn Hall. Well-respected by even the Woodman elders and popular with his men. Is known as the Amber Hand as he came back from the East with a small fortune in amber that he spends lavishly to assist new settlers and purchase materials for the village. Has a white hound named Frost.
Eldarrun the Scribe: Mentioned in the final testimony of Olveg the Bridge-Breaker. Assumed to be the man or elf who copied down Olveg's dying words for posterity.
Emrin: First man to hold the title of King's Huntsman. Original bearer of the Badge of Emrin, parts of which are in the fellowship's possession.

The Fox: Woodman confidante of Eberulf met at the Great Hall of Rhosgobel. The Eagle learned much about Eberulf and Thorn Hall by talking with him.

Gos: Mountain giant who lives near the high road of the High Pass.
Gishak Gashnaga: Identity is currently unknown, but is seemingly aligned with the goblins of Eriador in some capacity and is trying to forge an alliance with the spiders of Mt. Neb.

Ingmir, son of Inolgar: Scholar of Arnorian history who lives in Eriador, west of the Misty Mountains. It is he whom Radagast suggested you seek out to determine the provenance of the trinkets from Old Fornost owned by Fjöri and Eltharion.
Innora, daughter of Ingmir: Assistant to her father and possible apprentice scholar.
Ivoric: One-eyed Beorning who collects tolls at the Old Ford. He was impressed with the fellowship and offered them food and lodging, collecting only a token toll payment from them.

Olveg the Bridge-Breaker: Last King's Huntsman. Perished fighting the forces of Rhudaur, bringing down a bridge to stop the advance of enemies forces. Interred in the crypts beneath Faroth-bran, the Hunting Hall, along with the Badge of Emrin.

She-Whose-Threads-Turn-Day-to-Night: The goblins called the spiders of Faroth-bran "the Children of Sho-Whose-Threads-Turn-Day-to-Night." It is unknown if this refers to one of the great spiders of the First Age or if this is the title of another arachnid mother who spawned the Misty Mountain spiders.
Sunnegisil, son of Sigibert the Shepherd: A young Woodman boy met at the edge of Radagast’s grove, waiting there for the path to appear.

Tarcil, Sixth High King of Arnor: Reigned from T.A. 435-515. Was the first High King to appoint a King's Huntsman to oversee the royal preserves and woodlands of Arnor.

Unknown: Woodman woman found among the Beorning toll-collectors at the Old Ford. Her presence there among Beorn’s people was noted as unusual.
Unknown: Peddler and provisioner who sold food to the fellowship at the Old Ford.

The One Ring Campaign

A Fellowship of Links